Farmer Dries Lahousse from Elverdinge is active in arable farming and breeds poultry, but also owns a dairy barn housing 170 cows. Amongst those are also several older animals that have already produced more than 100,000 liters of milk. In order to maintain production throughout the year for all cows, including the oldest ones, he recently invested in basket fans, for extra cooling on top of the natural ventilation.

Dries’s barn consists of two parts, one measuring 50 by 18 meters and the other measuring 40 by 26 meters. “It is not a big barn, considering it’s housing so many animals, and the orientation isn’t optimal, which can rapidly lead to high temperatures in the summer months”, says Wout Goderis of Goderis CowCompany. “However, it is too large to use a tube ventilation system efficiently. That’s why we have opted for seven big basket fans above the stalls, that start automatically when the barn temperature rises too much.”

“The result is fewer flies, drier stalls and, above all, better animal welfare” 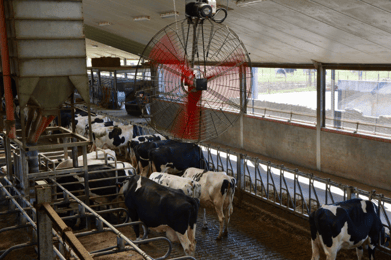 The fans are a perfect match

“These fans each have a 131-centimeter diameter. I have set the motors to a starting temperature of 18°C, at that temperature they work at 20%. And at a temperature of 24°C the fans run full speed. This way, the air speed just above the backs is never higher than 2 meters per second and there is no palpable draft”, Dries explains. “The result is fewer flies, drier stalls and, above all, better animal welfare. It reduces my veterinary costs and it leads to higher fertility rates and higher productions. And yes, even the older cows remain at the same production level all year round!”

As a result, the dairy farmer thinks he will have already earned his fans back in just three to four years. “I was able to receive 30% VLIF support for this investment, because it’s a sustainability investment. And the electricity costs are also not too bad, because the motors are frequency-controlled and because I have solar panels on my poultry houses. The panels produce most of their power in the summer months and they are, therefore, a perfect match for the fans”, he adds.