Assimilation lamps give off a lot of heat that stays in the top of the greenhouse while having it closer to the crop would be preferable. And when the screen is closed, the temperature also rises too much. Fresh Valley has solved both problems with a combination of two vertical fans. After a successful trial, Bert van den Brand has adapted the system for his other site, where it allows light shielding without complications.

When Bert van den Brand increased the assimilation lighting at his company in Uden from 8,000 to 13,000 lux at the end of 2014, he encountered a problem. “That site is close to a residential area and we have to screen the light really well. But at such a high level of light, the night temperature rises so much that your daily temperature is out of kilter. This results in thin and scrawny plants" he says. He was looking for a relatively simple solution to that problem.

Coincidentally, since the beginning of that year, a trial was being conducted with a combination of two fans at his location in Maasbree, set up by Wageningen University & Research in collaboration with suppliers. The results were such that the grower decided to adapt the system for his location in Uden. 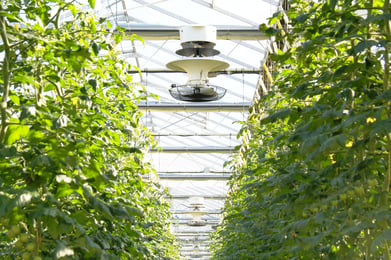 Private label
Fresh Valley has two locations of 2.7 ha (Uden) and 6.3 ha (Siberië, Maasbree). The company mainly grows Juanita, a sweet little vine tomato that is sold under the private label L'Amuse. The company also supplies Kumato, a golden-brown tomato that is grown by colleagues. In Maasbree, half of the area has been equipped with 10,000 lux, the other half with 13,000 lux. Half of the electricity needed comes from the company's own CHP, the other half is purchased. They decided on this approach to prevent creating a very large heating surplus.

Even after the trial (3,000 m2, the combination of fans remained in place in Maasbree. “The bottom one–the Multifan V-FloFan–pulls the cold air up from the bottom and spreads it horizontally so that it passes along the lamps and heats up. When the lights are on, this fan is always on, "he says. That is also the case in Uden.

The upper one–an axial fan–pulls cold dry air down through the closed cloth. This air bounces on a plate and is then distributed by the lower fan. The upper one is only on if it gets too hot or too humid under the screen. The result of the combination is improved mixing of the greenhouse air so that horizontal and vertical temperature differences are reduced. Van den Brand: “Before the test, I did not expect that it would work out so well. But not only did the measurements from Wageningen University & Research show a better temperature distribution, the crop also looks more even.”

Reluctance about NGG
He mostly lets 'Next Generation Growing' (NGG) pass him by: "With an unlit greenhouse, NGG does offer considerable energy savings, but we have lighting everywhere. This approach certainly has its benefits. but I can also see accidents happening. You would take great risks to save a few cubic meters of gas. It could be at the expense of quality and taste. The taste can deteriorate if you slow down evaporation. We cannot afford that with our private label. This is why we are very reluctant about NGG. There's a big difference between being production and cost oriented, or market oriented, like us. We'd rather not take any chances."