When storing potatoes, air movement is necessary to maintain the quality of the potatoes for as long as possible. Moisture levels and temperature should be carefully managed from the moment the harvest is placed in storage. This way, the supply of potatoes can continue for a longer period between harvests. In this article, we will tell you more about the importance of circulation and ventilation in potato storages, and the use of different types of fans.

Potatoes lose a lot of moisture through 'respiration'. Potatoes absorb oxygen, which leads to sugars being converted into water and CO2. Heat is also released during this process. Maintaining the correct temperature during storage slows this process down.

“Potato respiration is at its lowest between 4 and 8°C. Their respiration intensity increases sharply starting from 15°C and at temperatures below 4°C. Particularly in well-insulated storages (low oxygen), increased respiration can lead to CO2 accumulation and internal black discoloration. An excessively high CO2 content leads to sprouting..." Potato storage: construction and storage process https://edepot.wur.nl/13522

The importance of ventilation as a sprout inhibitor

In addition to limiting moisture loss, it is important to keep the potatoes in dormancy for as long as possible. The speed at which potatoes sprout depends on factors such as the temperature during the growing season, the conditions in the storage, and the type of potato. In modern potato storages, various complex circulation and ventilation technologies are used for the reasons mentioned above, depending on the crop.

The use of high pressure fans in potato storages

The ventilation in potato storages is based on 100 m3 air per m3 of potatoes (edepot.wur). Because the potatoes are stored in bulk or in boxes, air ducts as shown in Figure 1 are used. These ducts are used to dry the potatoes at the bottom of the pile as well. Since a considerable amount of air is being moved through a small duct and in between the potatoes, the pressure due to resistance can rise to 150 Pascal. Fans with a higher pressure range are used for this purpose. In the example below, the potato fans are connected to the air duct as well as the space above the potatoes, with a chimney. This way, air can circulate through the storage.

The use of circulation fans in potato storages

Additionally, circulation fans are used to increase the generated air speed in the top of the storage. By mounting these fans to the ceiling along the length of the storage, air circulation is improved and, as a result, the drying and cooling process. 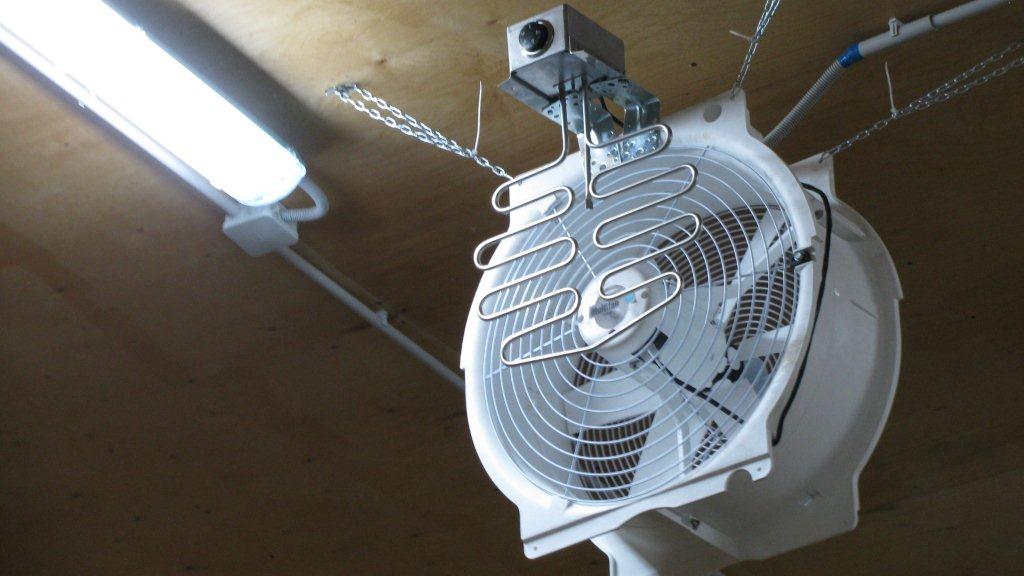 In addition to technical climate control means, predominantly chemical sprout inhibitors are used. Chlorpropham, a powder that is sprinkled over the potatoes, used to be a popular example of this type of product. This product was recently banned in Europe however. Although a transition period is in place, in practice this means that in 2021, the legal quantity will go from 10 to 0.4 milligrams CIPC per kilogram of potatoes, after which this will be further reduced. (BO arable farming *2) With persistent CIPC residues in storages where the agent was previously used, according to the organization this often means a thorough cleaning and making use of temporary alternative storage. These measures will prevent contamination of new harvests.

Without Chlorpropham and the usual ventilation system, growers are faced with a challenge. To provide alternative storage with as much air movement as possible, the use of mobile and horizontal circulation fans may offer growers a temporary solution. Thanks to the relatively simple installation, drying is still possible regardless of the local situation.

If you are looking for an emergency solution for your drying or cooling process, take a look at our circulation fans or talk to one of our specialists. We'll be happy to help.

There are no related blogs