Between January 2018 and May 2019, Vostermans Ventilation teamed with the University of Georgia’s Department of Poultry Science. They conducted a study on high-speed air circulation in broiler houses and how this affects litter quality, footpad health, and Oocyst Sporulation. For this study, eight Multifan 24” 1/3HP Fans (each 6,000 CFM) were used in a 40’ x 500’ house (+/- 12 x 150m), adjacent to the identical control house, which did not employ circulation fans.

Destratification and reducing heater run-time
For both houses, 14 temperature sensors were distributed to measure floor and ceiling temperatures. In the winter, between November and January, the temperatures in the control house varied over 5F or 2.7C more than 50% of the time. Whereas in the Multifan test house, the temperatures never varied over 5F 99% of the time. The circulation fans homogenized the temperature throughout the house and de-stratified the air. The air movement also prevented the brooding heaters from over-heating the floor beneath, decreasing heater run-time and decreasing system response time.

Bird behavior
It was observed that in the control house during the winter, 80% of birds were huddling towards the sidewalls, away from the heaters in the center of the house. In the Multifan test house, birds were evenly distributed throughout the house, in the center, sidewalls, and drinkers. See figure 1 and 2. Traditionally, growers have limited air velocity at floor level to 50 ft/min. Using the Multifan circulation fans, air speed at floor level was increased to 150 ft/min, but with proper air temperature, the day-old chicks did not exhibit any adverse reactions. 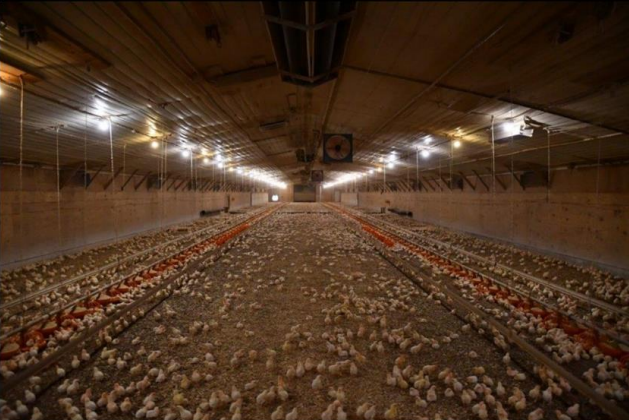 Reduction in litter moisture
The effect of the higher air-speed on moisture levels in the litter was more apparent in the first 21 days of each flock, at approximately a 10% reduction (measured based on 200g homogenized samples). Overall, through 5 flocks, the average reduction in moisture was approximately 6%. This may sound as a small amount, however even seemingly small amounts of moisture reduction can lead to improvements in bird health, the formation of caked litter and subsequently the development of footpad lesions. In addition to improving the average litter moisture, the airspeed also reduced the difference in the moisture levels from the sidewall to the center of the house.This way, circulation fans will actively aid in litter moisture removal, even if you don't control humidity and it gets too high.

Reduction of ammonia levels
In addition to the improvements on temperature, bird behavior and litter quality, ammonia levels were also reduced significantly. The test house averaged ammonia levels below 15ppm, while the control house recorded levels from 20-30ppm throughout the flock. Keeping the litter moisture level low reduces ammonia levels which is beneficial for the health condition of the birds.

Conclusion of the study
The study led by the University of Georgia Department of Poultry Science showed very good results with the higher air speeds obtained by using the Multifan circulation fans. The improved house conditions could translate to a financial benefit for the grower, reducing heater run time, and improving bird health.

Read the Project Summary and Full Report on USPOULTRY.org by following these links:

For more on circulation in poultry houses:

Preventing footpad dermatitis in broilers: The importance of ventilation

How do I determine the ideal ventilation system for my poultry house?